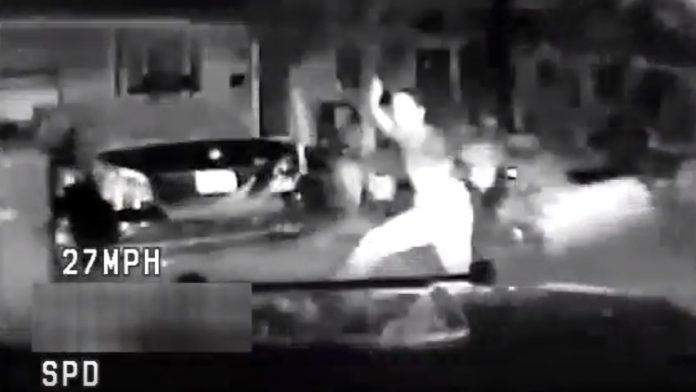 After hitting the boy, body camera video shows the officer handcuffing him as he screams in pain.

From the video alone, it is unclear if the collision was intentional. Police say it was a case of reckless driving by the officer.

“That was an unintended collision,” said Sgt. Vance Chandler, spokesman for the Sacramento Police Department. “That officer was driving at a speed too fast to make that turn.” He added that officers are authorized to use their vehicles to stop suspects only in “extreme circumstances.”

Police said the boy was transported to the hospital with non-life-threatening injuries.

People in the background can be heard yelling and asking police, “Why did you hit him?”

According to The Sacramento Bee, a crowd of screaming people gathered almost instantly, including the boy’s aunt, Rosemarie Gevara, who yells “you guys f—ing ran over my nephew!”

At one point, the boy told police,“I f—ing flew man, I f—ing flew.” He also asked police, “Will I end up in a wheelchair?”

In a statement Friday, Sacramento Police Chief Daniel Hahn said, “Clearly, this collision could have been tragic. I am grateful the young man was not more seriously injured and that no one else was injured. Our training is designed to prevent this sort of thing from happening. We are going to make sure our training—and the officer’s adherence to that training—is as solid as it can be.”